Tournament Results
On Sunday, January 14th, 2018, we, the QH BioDragons, competed in a VEX In the Zone tournament at the Baltimore Robotics Center located on 1001 West Pratt Street.  We've been preparing for this competition since mid-November, arduously balancing our time between our schoolwork, to make time to build, complete, and test the robot we would be using to compete against the Baltimore teams. Needless to say, we were very nervous the day before the competition! 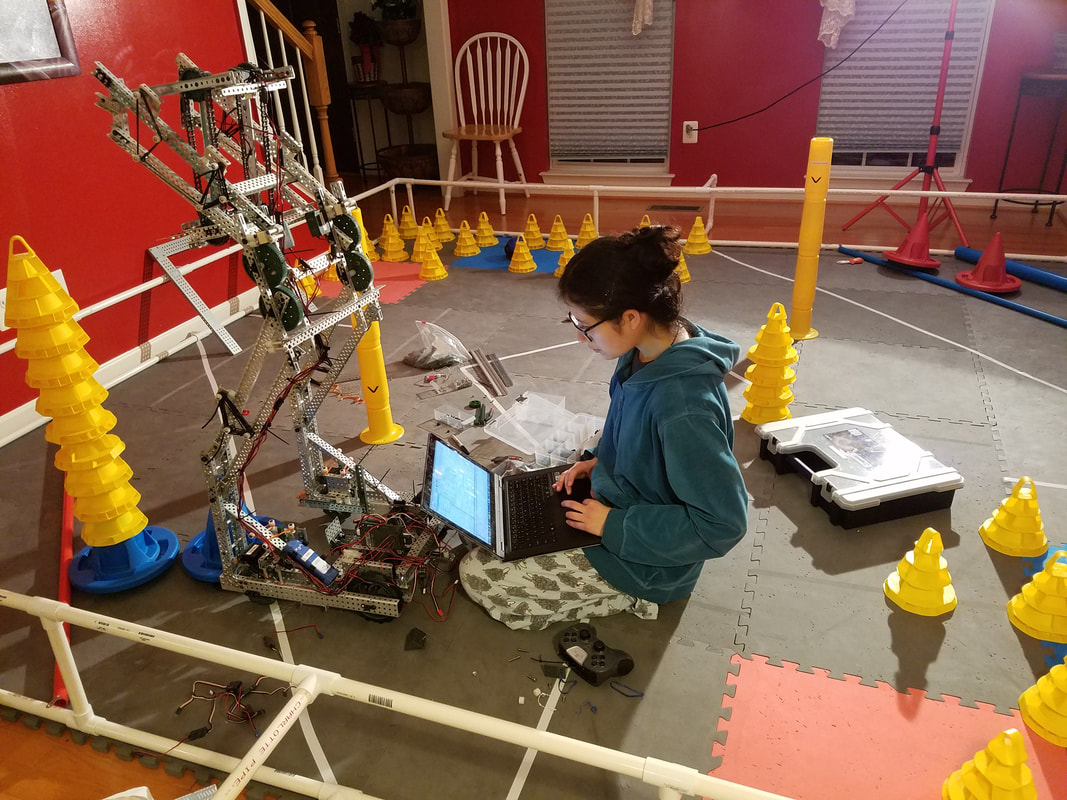 Elizabeth with the robot, checking the program for motor port connections and organizing the cables 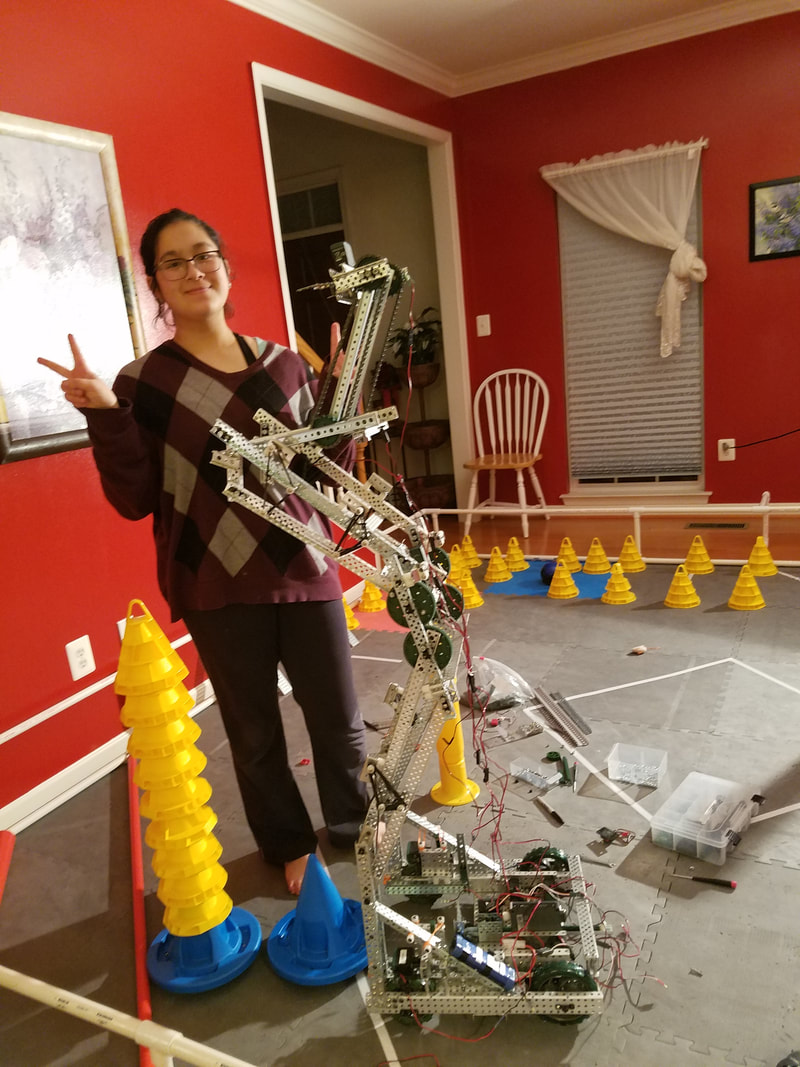 Stephanie standing next to the robot at its full height.
During the competition, we had a lot of fun competing side by side with the other Baltimore teams!  Our robot could stack cones on the high posts and on the mobile goals. It could also carry around the mobile goals, using a simple linear lifting system at the front of the robot, and place them in the 10 points zone. Using chains, our claw was able to remain parallel to the ground as the arm was lifted, making it easier to place the yellow cones on the higher stacks. Overall, our robot performed very well during each of the matches! Probably the only problem we had was that sometimes the arm would get stuck when it was trying to lift a cone, but as we were in the middle of competing, that problem was easily compensated by using the lift to raise the cone, since no matter what position it was in, the claw was always parallel to the ground.
Our last match of the entire tournament, qualifier match #24, was quite the finale! For our last match, we were the red alliance, and as the time for the match to start approached, we soon realized that our alliance partner was not going to show up! We do not know the reason why they weren't able to compete in this match, but we ended up fighting the blue alliance by ourselves! It was actually really exciting! We had to battle against the odds! We ended up losing 42 - 89, but it was still quite the thrill, for both the audience and ourselves! 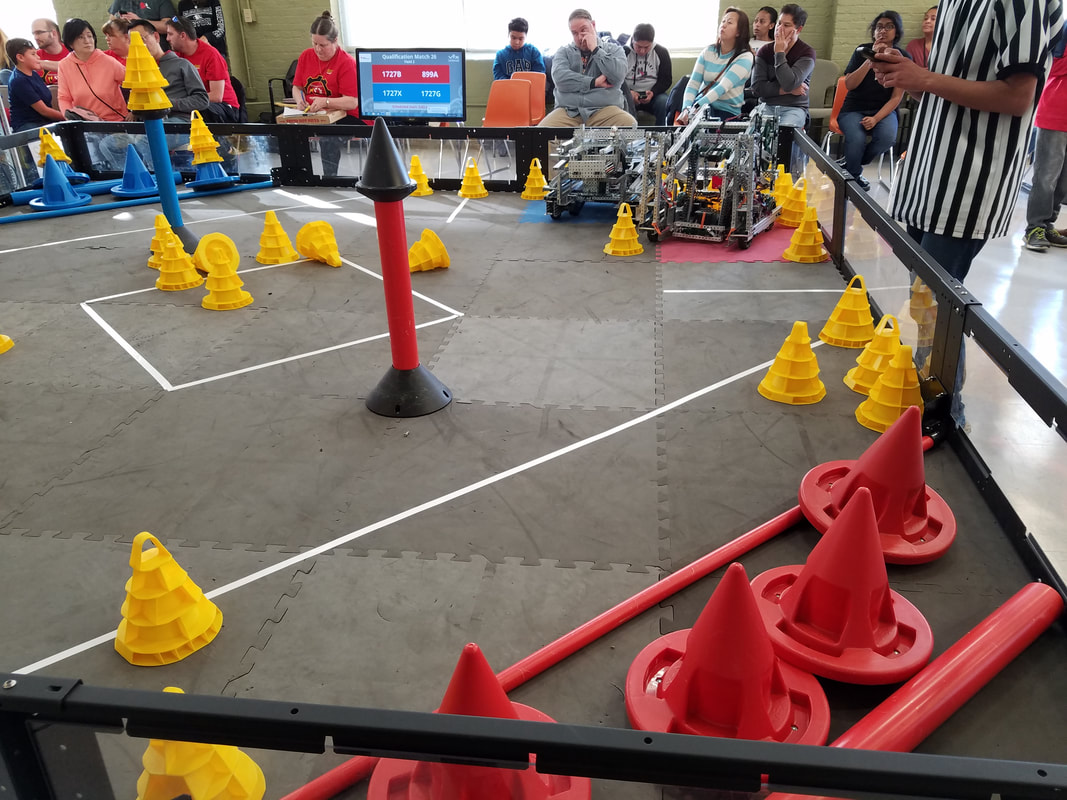 This was qualifier match #24 where our robot had to battle against the other 2 teams from the blue alliance. We scored a total of 42 points: 40 points from 4 red mobile goals scored in the 10 point zone, and an additional 2 points for parking in the red starting tile before the end of the match.
One the moment for alliance selection came after the qualifier rounds were over, we were sure that our time at the VEX Tournament would be coming to an end as we came in 12th place with 2 wins and 4 losses. All of a sudden, the team alliance with the teams from first place, team 1727G REX, and fourth place, 2546A Electric Sheep A ​(the team we went against in qualifier match #24), come over to us and ask us to be the last members of their team alliance for the semi-finals! We were ecstatic to hear that they wanted us on their team and we heartily accepted their invitation! Our battle wasn't quite over yet!
We won our first two semi-final matches, putting us straight to the finals!!! Last year in the VEX Starstruck Hagerstown competition, we also made it to the finals but unfortunately wound up in second place. So you can imagine how hard our hearts were beating when we were in the same position at this competition. We wanted that first place title, and we wanted it bad!
We lost our first finals match against the blue alliance, and it was best 2 out of 3. We had to win the next one! In the second match of the finals, it looked like a really close call! We were holding our hands together in prayer that we would win this match so that we could be up for another. If we lost, that would be it for us. The scores are put on the screen and it was a tie, 65 - 65!!! We still had a chance to win the champion title!
Our team ended up winning the last 2 matches, crowning the three of our teams the tournament champions!!! We were so happy to have been a part of this team and to have contributed to this victory! With this trophy, we also received a ticket to compete in the Maryland State Championship in February!!

We look forward to competing in the Maryland State Championship!!! 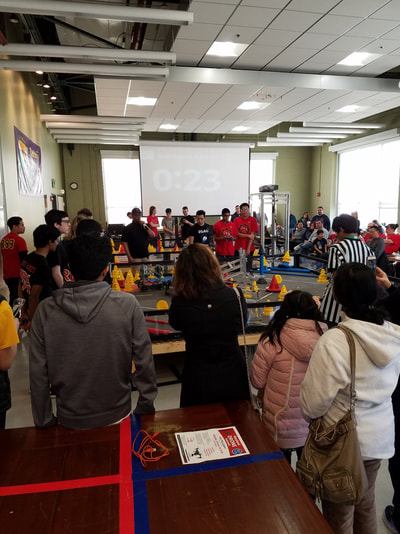 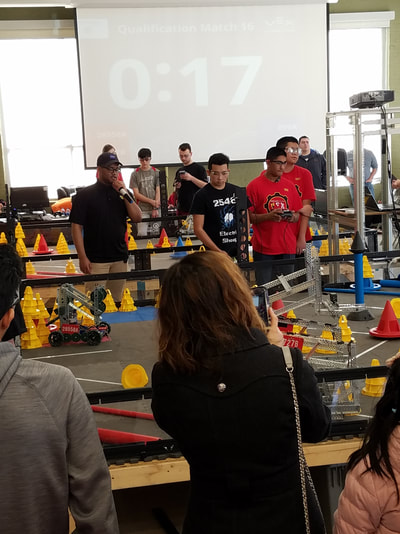 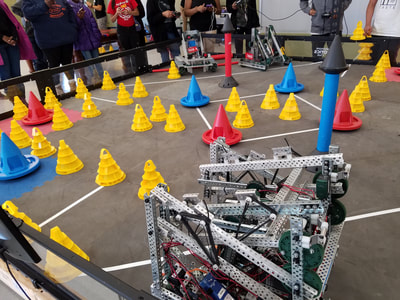