Because of the very limited time that we had to complete this challenge, admittedly what we created weren't works of art, pun intended.  However it was the best we could have done for the limited time that we had. When we first heard of the challenge it was two days before the deadline for registration. We quickly came to the decision that we wanted to participate. We knew that with the short time we had we couldn't produce the quality robot that we wanted to produce, but it was better to participate and produce something then not participate at all. However even with this huge restriction, we more then ready to take on the challenge.
We registered a team and got to work almost immediately. All time not spent on working on homework, other projects, and college research was time spent on building the robot.
The robot was composed entirely of VEX pieces, being the only materials that were available to us at the time. Buying new materials would only cost us both money and time. Two things which we did not have. Inspired by claw machines and 3-D printers, we composed a robot that works similarly to those two devices.
A worm gear was used to move the paint brush it was connected to up and down to apply pressure. That worm gear mechanism was then attached to a device that used linear bars, a 36-tooth gear, and a motor to move horizontal across the X-axis. That device was then attached to a similar device that worked in the opposite direction, vertically and across the Y-axis. The whole thing was supported by several metal bars that held the whole thing up by about ten inches.
This whole contraption took about 6 days to build. (Mind you that at the same time we were building this we were also attending school, completing homework, practicing our respect art forms and working on individual projects).
During the week leading up to the deadline we completed three different art pieces. For a manually controlled robot, they're not that bad.
There is so much more that we can do with this, and we can't wait to participate in next years challenge. We already have so much planned already! 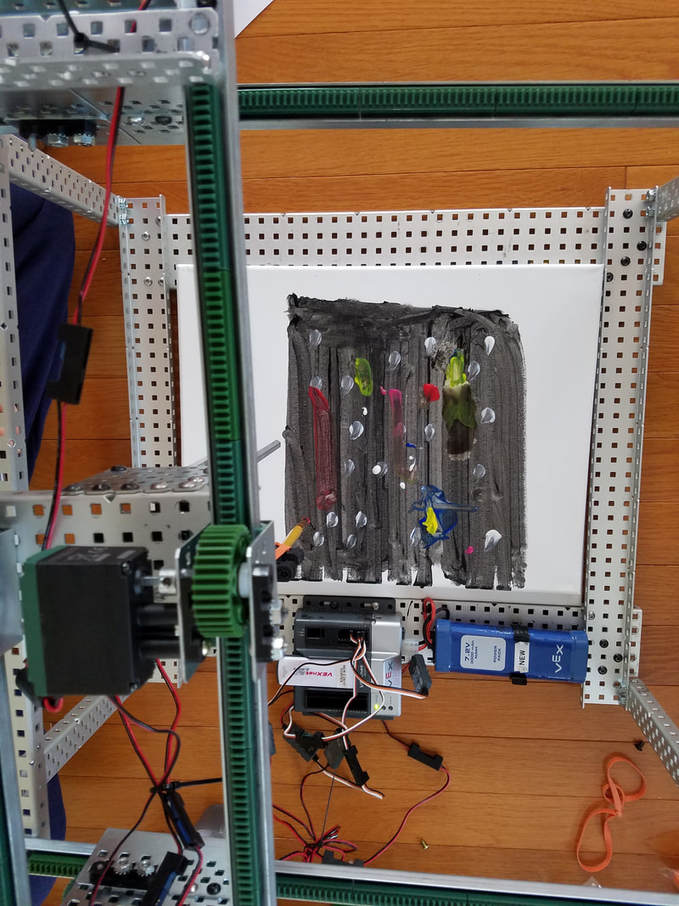 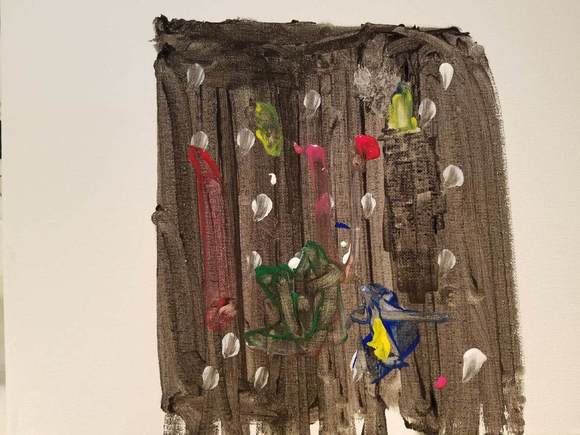 Just recently, on October 27, 2017, the Imagine the Future - Youth Video Challenge deadline passed and the both of us made this video (seen below) for this challenge which was held by the KID Museum in partnership with the Arthur C. Clarke Foundation. It was a challenge where a person or a team of 3-5 people had to use the power of film and storytelling to develop an imaginative solution that could be applied to a problem that  needed solving today, so that by 2042, the world would be a better place. We decided to get creative and shoot our video in the form of a futuristic news channel that focused on our main idea, which was an AI algorithm that helped to eradicate cyber-bullying across the globe as well as incidents where people have posted unwanted pictures of others on the Internet, and insert a commercial that demonstrated yet another idea that we called 'Insta-gro' which were seeds that allowed people to conveniently grow food in an insanely short amount of time, therefore addressing the world hunger and food shortage problem. Throughout the video we also hinted at signs of human colonies on the moon and on Jupiter, as well as fast intergalactic travel and the mention of the invention of a renewable source of energy on Mars.  We had so much fun creating this video and we hope you enjoy it too!
Imagine the Future - Youth Video Challenge

In the summer of 2014 we attended a starting entrepreneur education class lead by Shahab Kaviani and Girolama Bui. We would spend an hour of the weekend to discuss the essentials of starting a business and ask questions concerning the topic we learning about. After words we sometimes would be assigned homework such as researching how businesses worked, or supply and demand. We would often sometimes have to go out and investigate different stores to observe how they operated.
At the end of the classes we presented our own original ideas to a group of judges to show off what we learned and how we applied that to making our own business. Our presentations were hypothetical, but it was so inspiring to see how some of our other classmates, who had actual working businesses, grow! It was lots of fun and educational and a great learning experience to have been a part of!!!! ​
Launch Academy

The American Association for the Advancement of Science

During our middle school years as STEM Magnet students at Springfield, we had to do a STEM-related summer project . One of the summer projects Stephanie did centered around the question: could different types of materials that were found around the house do a better job in keeping out dust then regular commercial filters? In the experiment we used onion skin, corn husk, two different types of commercial filters, a coffee filter, gauze, and cheese cloth. And instead of searching for dust bunnies in our closets, we used flour as a substitute.
To collect data we used a dust sensor to read the levels of dust pre-filter and post-filter, and a vibration sensor to read how much air was actually passing through to the other side. After all, a filter that doesn't let air in would be no better than a brick wall. After the experiment was concluded, we arranged the data, and to our surprise, saw that the onion skin performed better than both of the commercial filters. While we were excited about the surprising results, what was even more exciting was what happened two years later.
Two years later, my sister and I were interviewed by the American Association for the Advancement of Science (AAAS) to talk about green technology and how it can help improve the environment. We brought along this filter project because it demonstrated the use of green technology, as it incorporated the experimentation of onion skin as a home/window filtration system.
It was truly a great experience to talk to representatives of the AAAS about our small project and the future of inventing green to help save our environment. If you'd like to see the video they made about turning Ideas to Inventions where my sister and I are featured, please click on the button below!
Turning Ideas into Inventions 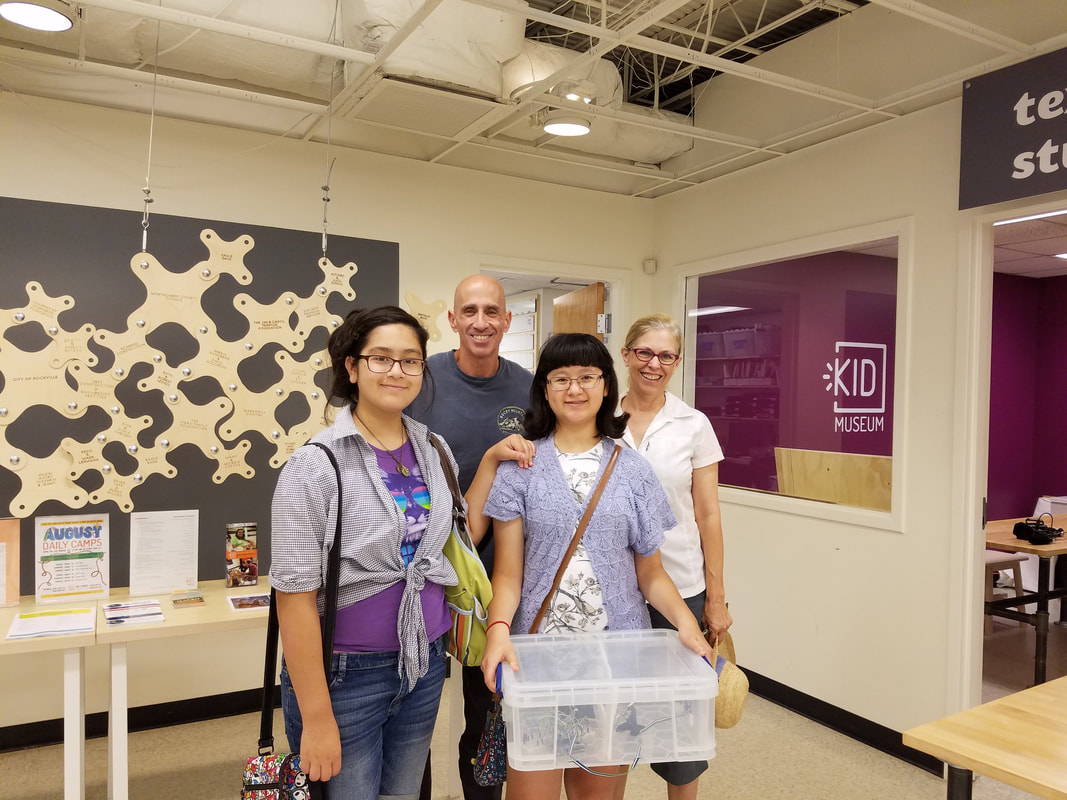 Here is Stephanie and Elizabeth, who is holding the box with the filter experiment, with Bob Hirshon and his wife who are members of the AAA

When Elizabeth was a sophomore in high school, she was invited, along with one other student in her grade level, to attend the annual Hugh O'Brian Youth Leadership seminar (HOBY) held at Mount St. Mary's University. This was a three day experience where Elizabeth learned all about different types of leadership and worldly views, performed various types of community service around the area, and discovered the ways that she could start community service projects in her own school. It really was quite the experience, being away from home and being with people from different schools  across the state! I was able to get an insight to different religions, cultures, and mindsets! It was all really eyeopening and the seminars that we attended were all so inspiring and ranged in addressing issues from gender equality to racial/ethnic equality to bullying and other topics that were important to address in today's schools and communities. 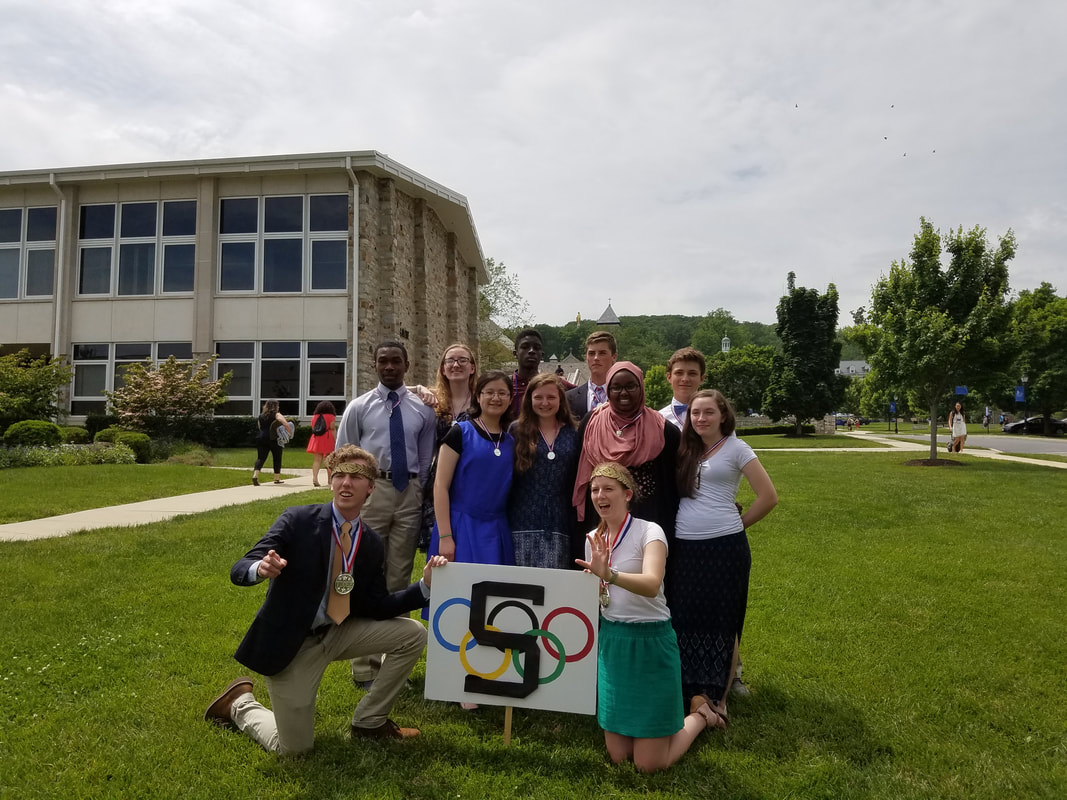 Elizabeth as a sophomore in Team 5 at the Hugh O'Brian Youth Leadership seminar (HOBY). She was one of two sophomores from her school that was selected to participate in this 3 day event held at Mount St. Mary's University.